April 17, 2019 – Vancouver, BC, Canada– Select Sands Corp. (“Select Sands” or the “Company”) (TSXV: SNS, OTC: SLSDF) announces operational and financial results for Q4 and full year 2018, and the filing of its financial statements and associated management’s discussion and analysis on www.sedar.com. The Company will host a conference call on Thursday, April 18, 2019 at 10:00 A.M. Central to discuss its Q4 and full year 2018 results (see “Conference Call Information” later in this release for access information).

(1)Adjusted EBITDA is a non-IFRS financial measure and is described and reconciled to net loss in the table under “Non-IFRS Financial Measures”.

Zig Vitols, President and Chief Executive Officer, commented, “We were clearly pleased to report significant year-over-year financial improvement in revenue, gross profit and adjusted EBITDA for the full year 2018, and I want to thank all of our employees for their continued hard work and dedication.  As we discussed in our third quarter 2018 results press release and conference call, the significant downturn in the demand for frac sand impacted frac sand producers across the industry.  In addition, we were negatively affected by a further move by E&Ps in the southern U.S. oil producing basins to use a much higher percentage of local brown sand being produced in the Texas basins instead of the high quality Northern White sand that we produce.

“Recognizing the critical importance of managing costs and preserving working capital, we responded quickly on a number of fronts, including moving to single shift operations to ensure optimal control of overhead and temporarily suspending activities on our proposed project to expand annual production capacity from 600,000 tons to 1 million tons.  On a positive note, we have seen a recent rebound in the demand for Northern White sand but will remain diligent in managing our cost profile as we wait for a continued gradual but steady frac sand market recovery, particularly in the demand for Northern White, that we expect to occur through the remainder of 2019.” 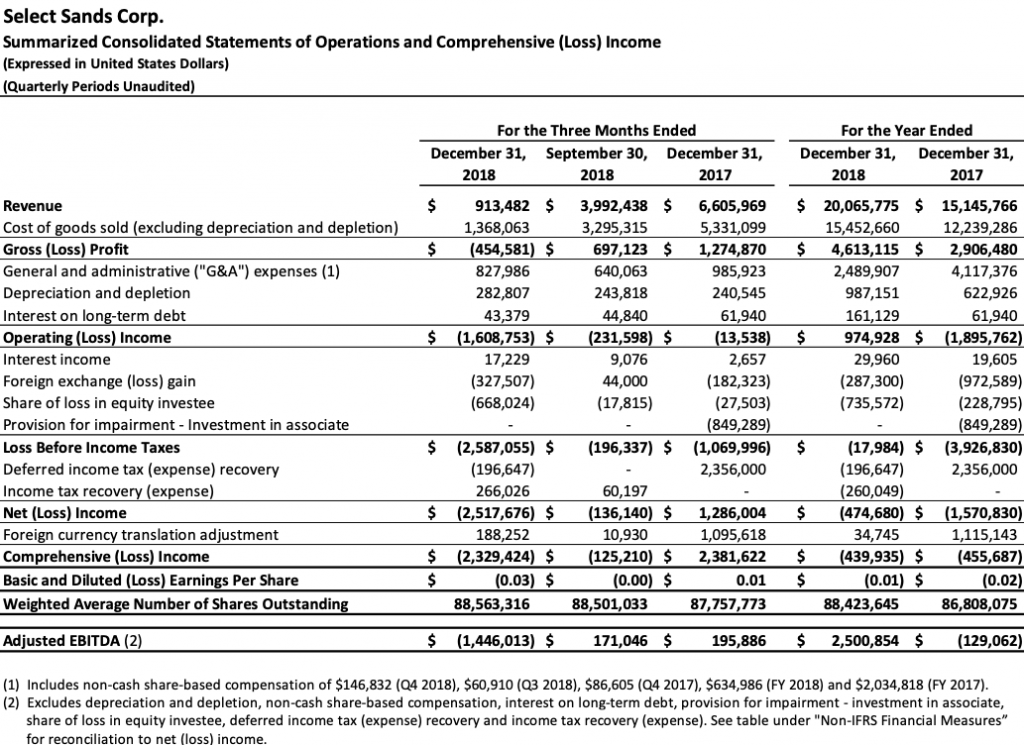 For Q1 2019, the Company expects sales volumes of frac and industrial sand of approximately 40,000 tons.

Mr. Vitols continued, “Similar to other frac sand producers, we were not immune to the supply and demand imbalance that began in the second half of 2018 as additional in-basin capacity came online and E&P operators began to source more of their frac sand locally.  The increase in production capacity reflects the frac sand industry responding to future expectations in drilling and completion activity over the coming years.  We expect to see further in-basin supply additions during 2019, which will continue to impact near-term frac sand pricing in the markets we serve.  However, given the continued strong underlying fundamentals of the North American oil and gas industry, we view the decrease in demand faced by frac sand producers as transitory in nature.  As it relates specifically to our continued deliveries into the Permian Basin, we anticipate increased well completion activity to occur beginning in the second half of this year as additional offtake capacity comes online and E&P operators more aggressively address their significant number of drilled but uncompleted wells.”

“During recent months we have seen signs that the industry is beginning to more fully recognize the benefits of using Northern White versus in-basin frac sand”, concluded Mr. Vitols.  “While clearly there is a transportation cost advantage for E&P operators to source frac sand as close to their wellsite as possible, the reduced performance characteristics – primarily crush strength and conductivity – of certain local and regional brown sand deposits appear to be negatively impacting the production performance of wells.  This has resulted in some of our customers re-dedicating their purchases back to Northern White.  As such, we believe that there is a continued long-term need for Northern White as E&P operators focus on optimizing the economic ultimate recovery of their well inventory.  Given the high quality of our Northern White sand product offering that is strategically located much closer to key oil and gas basins in the U.S. as compared to traditional sources in the Upper Midwest, we believe we are solidly positioned for long-term success as market conditions for high quality Northern White sand continue to improve.”

Elliott A. Mallard, PG of Kleinfelder is the qualified person as per the NI-43-101 and has reviewed and approved the technical contents of this news release.

The Company will host a conference call on Thursday, April 18, 2019 at 10:00 a.m. Central (CDT)to discuss Q4 and full year 2018 results. To access the conference call, callers in North America may dial toll free 1-855-669-9657and callers outside North America may dial 1-412-542-4135. Please call ten minutes ahead of the scheduled start time to ensure a proper connection and ask to be joined into the Select Sands call.

A playback of the conference call will be available in MP3 format by contacting investor relations below.

Select Sands Corporation is an industrial silica product company, which owns a number of properties in Arkansas and is currently in production at its 100% owned, Tier-1 (Northern White), silica sands property located near Sandtown, Arkansas, U.S.A.  Select Sands’ goal is to become a key supplier of premium industrial silica sand and frac sand to North American markets.  Select Sands’ Arkansas properties have a significant logistical advantage of being significantly closer to oil and gas markets located in Oklahoma, Texas and Louisiana than sources of similar sands from the Wisconsin area.  The Tier-1 reference above is a classification of frac sand developed by PropTester, Inc., an independent laboratory specializing in the research and testing of products utilized in hydraulic fracturing & cement operations, following ISO 13503-2:2006/API RP19C:2008 standards. 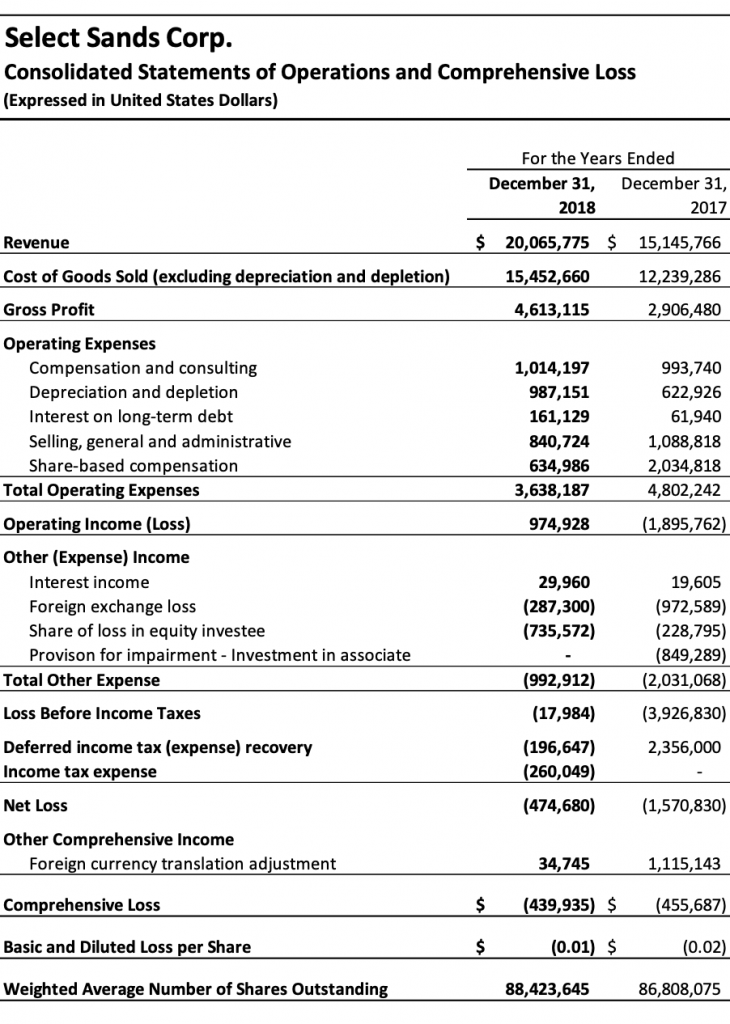 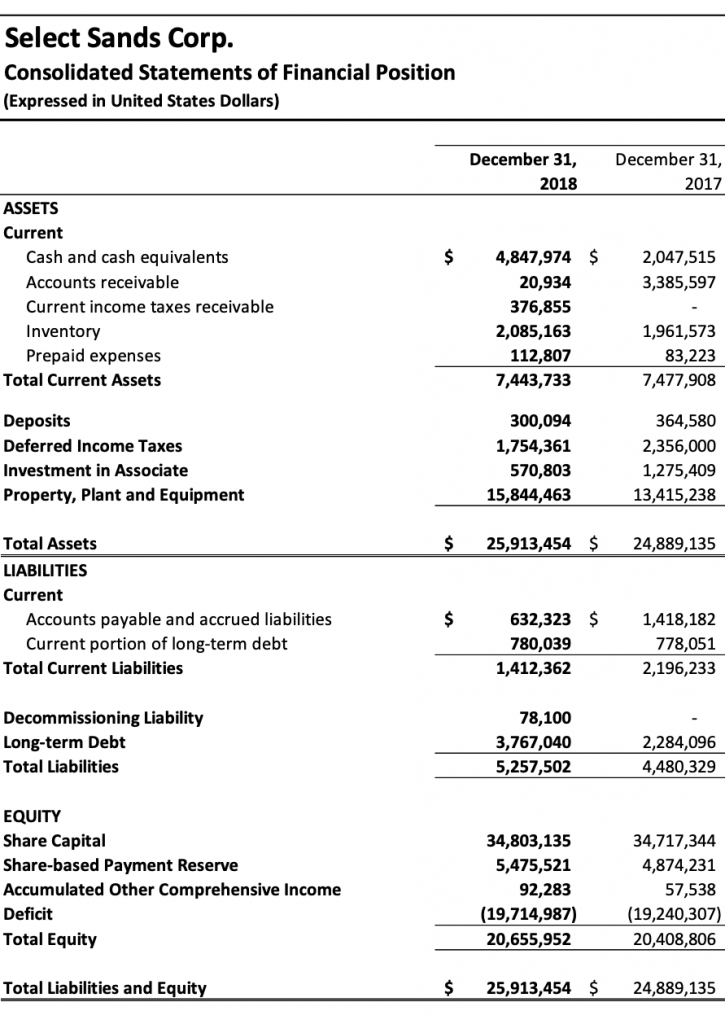 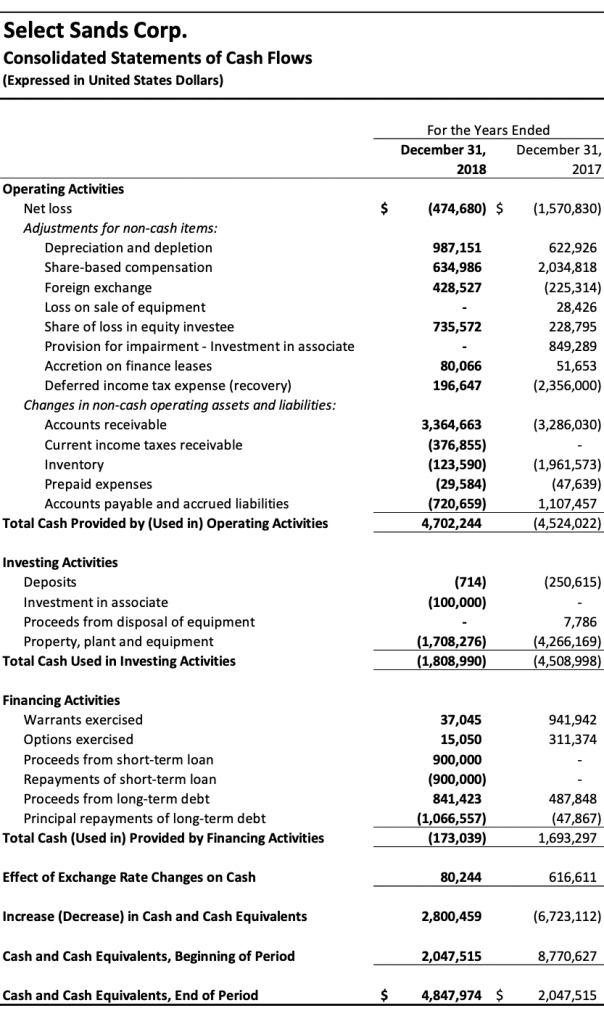 Scroll to Top
Join our Mailing List
Your Information will never be shared with any third party.

SUBSCRIBE NOW!
×
Thank you for subscribing.
Please check your email for a confirmation.